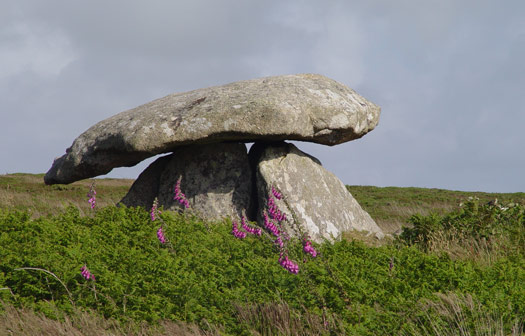 Chûn Quoit is the best preserved example of a quoit, or chambered tomb, in Cornwall, dating from the Neolithic period between 4000 to 3000 BC.

The name derives from the Cornish ‘Chy-an-Woone’, meaning ‘the House on the Downs’.

Chûn stands around two metre high with a rounded, roughly-circular capstone, about 3.3 metres across at its widest, supported by four upright stones about 1.5 metres high.

The capstone is the only example of its kind that has survived in its original position, as other quoits that appear to be intact, have had their capstones reseated. Chûn’s capstone also has a cup mark (a small hollow) carved into the rock.

The upright stones form a roughly square chamber, around 1.7 by 1.9 metres, that can be accessed via a hole in one of the sides. The floor level inside the chamber is significantly below the ground level outside.

It was once believed that quoits would have been completed covered with earth to form a barrow; however, this theory is no longer accepted by all archaeologists, and it is possible that they were built to be free standing.

There are about 20 known quoits in Cornwall, mostly found within the Penwith peninsula. Other well preserved quoits in Penwith include:

Note that quoits are also known as dolmens or cromlechs.

Cornish folklore says that any stones that are removed from a quoit will magically return to their original positions, and that anyone who removes them or tampers with them will be punished by a curse.

The nearby Chûn Castle is an iron age hillfort dating from the 2nd or 3rd century BC.